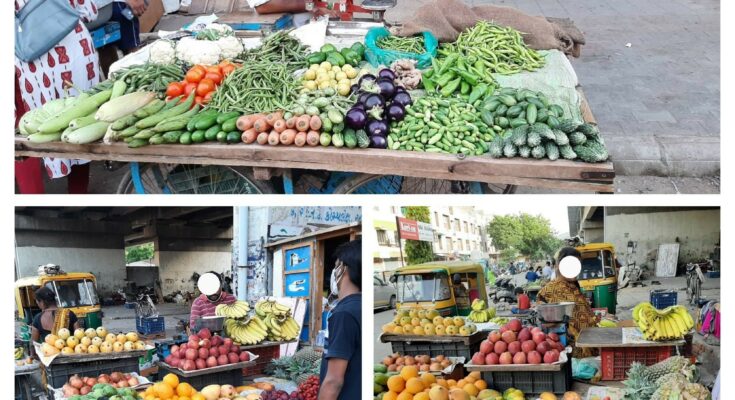 I recently moved to the US from India. My close encounter with fruit and vegetable trade in both countries made me realize how countries like India are much better off in fresh produce
retailing. In the US, most fruits and vegetables are sold at supermarkets like Walmart and Publix, while farmer’s market carries a minuscule share. It is also difficult to find small vendors as most of the market is controlled by giant supermarkets. Most of these fresh commodities are imported and pass-through cold storage to increase their shelf-life, plastic packed in fix sizes with few exemptions and largely constituted by GMOs (Genetically Modified organisms). The entire process has multiple repercussions. Starting with the use of cold storage which compromises the freshness of produce and demands excessive energy to run the system. Secondly, most of the items are imported, through a complex chain of ultra—long logistics and high-fuel consuming transportation. And lastly, the plastic packaging used has proven to a massive problem, causing severe negative impact on people and our planet. Also, as they are sold in fixed sizes, consumers are obliged to purchase the entire pack even if their requirement is a small portion, which ultimately leads to perhaps the world’s dumbest problem – food waste.

In India, the majority of retail of fresh produce happens through small vendors on a daily basis with produce coming in from farms and rarely crossing state borders. And most business takes place in fruit and vegetable mandis (governed markets), which are found in almost every Indian town and city. The produce is sold loose, so consumers can purchase their required quantity with very minimal wastage at the end and buyers (mostly women) bring their own fabric tote bags so plastic use is almost negligible. Some vital points to note here are: Produce is sold fresh without being in cold storage, saving massive amounts of energy as well as offering the freshest produce to people. The mandis comprise of dozens, sometimes hundreds of small vendors, and almost no large organization (supermarket), which plays a big role in promoting the local economy and offers livelihood to numerous families while reducing the middlemen. It is a true farm-to-consumer business model. However, one major hurdle here is the pricing of goods and blatant corruption within the system. Due to the absence of a centralized economic body, the market is highly erratic, and farmers find it extremely challenging to get the right price most time. This, coupled with the emergence of online marketplaces and rampant corruption causes a huge problem for small farmers. There is a growing need to have a regulated market to reduce the risk to farmers and provide them with a systematic business model. However, these are loopholes in the system but at large India’s localized model have a competitive advantage over US model in various social and ecological context. 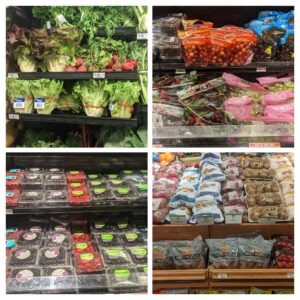 India’s local market model is extremely efficient but volatile. The western growth model approach and pressure from globalization can be immense, and the localized market model  might be compromised. This can be damaging in multiple ways. Therefore, India’s fresh produce retailing requires to be resilient against such external forces. This will eventually protect both the market and communities. On the other hand, due to the multiple benefits of the existing market structure of India, it can be an example for the world. It will also encourage global north countries like USA to have structural reforms of the market for more ecological balanced approach.

Note: This article does not take into account agriculture practices, only the functioning of
markets and cultural practices.
….
Short Bio
Kajal Patel is a researcher interested in areas of inequality, poverty, and degrowth. She finished her post-
graduation in – Emerging economies and International Development from Kings College in London and
worked as an archivist at Kasturbhai Lalbhai Museum in Ahmedabad, and most recently as a
tribal research fellow at the Aga Khan Rural Support Programme in India.

6 Comments on “Fruits and Vegetable Markets in India and US”