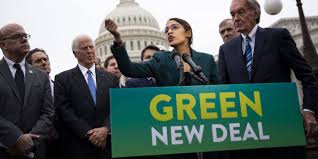 Call for papers for the Session “ Energy, material limitations, and conflicts of a Green New Deal ”

Initiatives for a Green New Deal (GND) have recently emerged in a number of countries in the global North. A number of publications are starting to point to a material limitation in the sourcing of materials necessary for 100% renewables economies. Van Exter et al. (2018) point that the global production of some metals should grow dozen times to support wind and solar energy production. Cumulated demand is expected to be higher than current estimated number of reserves for at least 12 minerals whilst several other minerals will also require high proportion of current reserves (Capellán-Perez et al., 2019). The extraction of minerals to fuel the transition to renewables is likely to increase land and water conflicts as the frontier of extraction advances. The main argument for over-coming supply bottle-necks in a ‘business as usual’ growth scenario is recycling. However inappropriate design, complex recovery processes and thermodynamic limits point to limits in the capacity of this solution (Valero et al., 2018).

Cost-shifting is characteristic – indeed internal – to capitalist production as a necessary practice for increasing profit margins (Kapp, 1975) and not an unintended externality to address by internalising it into the market. Given all these, and the fact that the most prominent versions of the GND have been criticised for their failure to take on capitalism, a set of questions for research, policy, and environmental politics emerge:

–       What types of new conflicts could a GND generate?

–       What places and groups are expected to be most vulnerable to such pressures?

–       What lessons could we learn from existing attempts to “green” economies (e.g. wind energy conflicts, etc.)?

–       How (if at all) could “just transition” projects be shaped in ways that minimise or avoid cost-shifting?

–       How do social movements react to cost-shifts related to just transitions, and what are their proposals for building alternatives to, or in the context of, the GND?

–       What would be the social-metabolic characteristics of just transitions, such as the GND?

We invite contributions that try to address these and other questions relevant to energy, material limitations, and conflicts of a Green New Deal or of just transitions broadly defined. We plan to organise one or two sessions that could include individual paper presentations or roundtables. We welcome both remote and live contributions. We are also open to art contributions or performances around this topic that could be combined with presentations