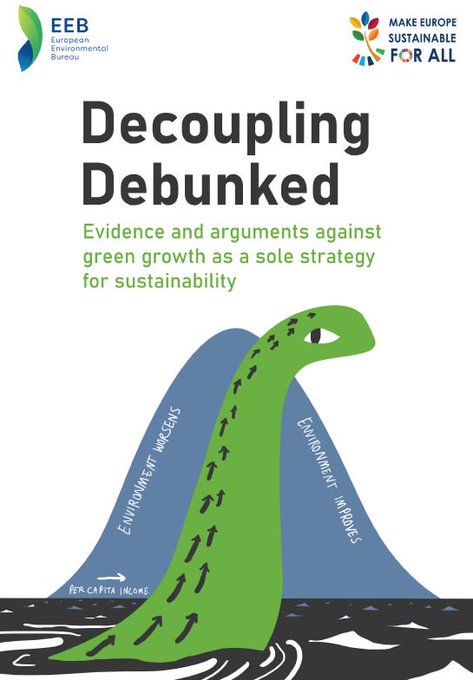 The report “Decoupling Debunked – Evidence and arguments against green growth as a sole strategy for sustainability” is a great source of information to refute the (still persistent) myth of decoupling
The final report version is here: https://eeb.org/library/decoupling-debunked/
The policy recommendations that the EEB made are here: https://eeb.org/library/beyond-sustainable-growth/
Article: https://meta.eeb.org/2019/10/22/time-for-a-grown-up-debate-about-the-future-of-economic-growth/
About the official release
https://www.eventbrite.com/e/decoupling-debunked-breakfast-debate-with-meps-and-eu-policymakers-tickets-66847170687
Twitter: https://twitter.com/Green_Europe/status/1184768350003630080
Tweet about the article: https://twitter.com/Green_Europe/status/1186661738663567362
Interview in the Newspaper of the New York State Society of certified public accountants.

Can our economies, like the universe, continue to expand indefinitely through ‘green growth’? A landmark EEB report finds that greater efficiency and renewables will not save the day alone. We also need sufficiency.

Can green growth deliver the magic formula of growing our economies while protecting the ecosphere from future collapse?

If green growth cannot provide prosperity for people and the planet they live on, what can?

These items were the main course on the menu of a breakfast debate organised by the European Environmental Bureau (EEB) for the European launch of ‘Decoupling debunked – Evidence and arguments against green growth as a sole strategy for sustainability’. The report has already sparked significant interest following its international release in New York in the summer, and has already been discussed or mentioned in the German, Danish and British parliaments.

Despite the event starting at 8am, the early birds in attendance dug in enthusiastically to the lively debate between researchers and policymakers, including MEPs Helmut Scholz (European United Left), Michael Bloss (Group of the Greens). The findings of the report, whose lead author was Timothée Parrique of the Stockholm Resilience Centre, were presented by the contributing author Jonathan Barth of Zoe, the Institute for Future Fit Economies.

When decoupling is not enough

Over the past few decades, economic growth has risen to become the leading measure of changes in prosperity and wellbeing.

The worsening climate crisis and environmental degradation led policymakers to adjust, rather than abandon, the paradigm of continuous economic expansion. This became known as ‘green growth’ and involved reducing the environmental impact of economic activity by decoupling, or separating, resource use from economic growth.

“European policies are contradicting one another. On the one hand, we want to become sustainable, minimise our emissions and bring down resource use significantly,” points out the EEB’s Director of Global Policies and Sustainability Patrizia Heidegger. “At the same time, our politicians continue to cater to an economic system in which stability and jobs need the continuous expansion of the economy.”

“If we want to prevent environmental collapse, we first need to end our dependency on economic growth and decouple our wellbeing from the GDP curve,” she adds.

The limits of decoupling

Although decoupling is useful and necessary, it has only occurred at certain times and places, not across the board. After analysing the empirical evidence, the report concludes that green growth cannot reduce resource use on anywhere near the scale required to deal with global environmental breakdown and to keep global warming below the target of 1.5°C above pre-industrial levels, the threshold established as part of the Paris Agreement.

“Efficiency by itself does not work, as long as bigger and more products eat up all previously saved energy and resources. This is what we call the rebound effect,” explains Jonathan Barth.

In addition to the rebound effect, the report identifies six other main reasons as to why the green growth paradigm is insufficient: rising energy expenditures, problem shifting, the underestimated impact of services, limited recycling potential, insufficient and inappropriate technological change, and cost shifting.

Blueprint for a green Europe

‘Decoupling debunked’ highlights the urgent need to rethink green growth policies and to identify alternative approaches that can safeguard prosperity and wellbeing while protecting the environment.

But what is the alternative to green growth? How can we maintain or improve our quality of life while preserving and repairing the planet?

‘Decoupling debunked’ concludes that increasing efficiency only makes sense if it is part of a wider pursuit of sufficiency, which is the direct downscaling of economic production and consumption in those sectors where it is needed most.

To flesh these ideas out, the EEB has produced a set of policy recommendations that outline a vision for a just economic transition for Europe. This includes:

There are those who object to such solutions, dismissing them as politically unworkable because of the perceived absence of political or public support.  “All institutions are aware of the fact that green growth alone doesn’t work, but fear to confront politicians with it,” observes Barth.

Moreover, not only does poll after poll reveal the environment to be the top concern of EU citizens, not to mention recent elections and the global climate movement, there also exists significant public support for transformative economic change, including from civil society and academia.

“Not only have the young climate activists put the question of system change higher up on the agenda, but also within such institutions as the European Parliament and the Commission, more and more people are recognising the limits of the economic growth model. The time is ripe for innovative policies,” observes Heidegger.

With creativity and determination, we can preserve the best of our current system, improve its failings, and live better more fulfilling lives. “We have little to lose if we grow up and, instead of relying on material growth, start to thrive within the wealth we have created,” insists Barth. “If we have more time for our families, if we walk through quiet streets and breathe clean air, I think most people will agree that this would be something to strive for.”