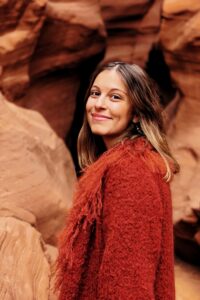 After traveling through Spain and Latin America, the first with her father touring the most deeply rooted popular festivities, and the second as a backpacker with the Ruta Quetzal, Lucía became an anthropologist. As a scholarship holder in New York (Fulbright and La Caixa at The New School and Columbia University), she connected her learnings at the local level with interrelated global crisis. She also completed training stays at the University of Kent (Canterbury, UK), the University of Santiago de Chile (Santiago, Chile), Tres de Febrero University (Buenos Aires, Argentina), and Casa de las Américas (Havana, Cuba), as well as ethnographic fieldwork in Cuba, Morocco, and Spain. Through fieldwork and with the impulse of projects that excite her, such as the Colectivo Badila to which she belongs, she explores traditional rural practices in the Iberian Peninsula aligned with degrowth in her Ph.D at ICTA-UAB. Degrowth means to her a guiding horizon and a place from which to think (better). She wants to learn to weave esparto grass and aspires to create an alternative educational
project in rural areas.