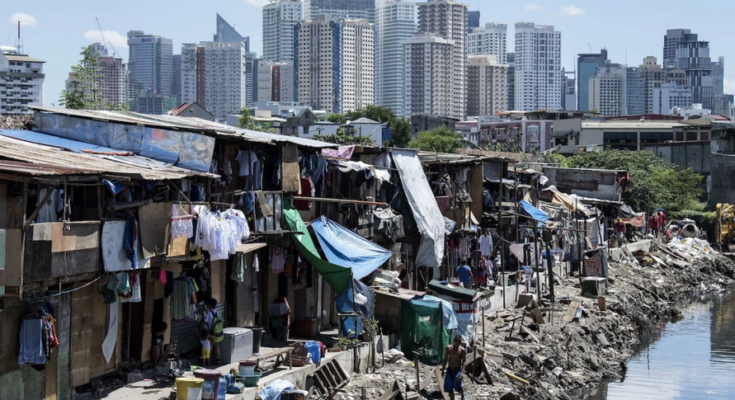 Capitalism creates winners and losers. Nothing new there. But the winning side, amazingly, manages to convince the losers that they, too, someday, somehow, shall win. Promised. How? Well, with a miracle. No, they do not recommend a pilgrimage to Lourdes. Just… Growth. Grrrrowth! As everybody knows, a rising tide lifts all boats. Right?

Well, economic growth did not really put food on everybody’s table. After fifty years of madcap capitalist metastasis, more than one billion human beings still live on less than a dollar a day, and that without access to clean water. In a rich country like France, another growth is that of poverty.

Not to mention that economic growth is now recognized as the culprit behind climate havoc, biodiversity extinction and the ever-rising mountain of waste crushing the world.

Degrowth is not a choice anymore, it is a necessity.

But how can we convince capitalism’s losers that degrowth, not growth, is the key to a better life for them? How can we transform an apparently negative notion, into a positive weapon, ideally suited to the needs of the victims of capitalism?

For there are many more losers than winners, in capitalism’s loaded lottery. The losers are not just the homeless who sleep under bridges and overpasses. They are also all the migrants who must tear themselves away from their homeland, the Vietnamese or Ethiopian factory workers who sew jackets and shoes for the whole world, the Colombian or Congolese sex workers, the children mine workers- so much cheaper than machines – and all the biosphere choked by car exhausts and drowning under billions of billions of microplastics particles. As well as the hundreds of millions of people in rich countries whose incomes are forever shrinking while their workload is forever increasing, and those who hold only McJobs and for whom « career » means going from Uber to Deliveroo.

In order to understand why degrowth will be a boon for the poor (and for the merely-not-rich), we must first define it. Recently the French degrowth researcher Timothée Parrique proposed this: « The strategy reducing the economy’s biophysical metabolism, capping wealth accumulation, simplifying needs and decentralizing power to the profit of citizens. »

The two first projects shall only come to fruition if this last one does. For an obvious reason: History proved, time and again, that the rich never, ever, willingly give up their privileges. In France, one remembers very well the night of the 4th of August 1789, during which the First and Second Estates, namely the Church and the Nobility, did just that. But it only happened because many of their brethren had recently died violent deaths, and many of their castles had been burnt to ashes.

One more thing: «free». This word also means free public transportation. Free health care. Free education, yes even free higher education. Free housing for the poorest. Free libraries, free museum tickets… Lots of goods and services provided free of charge by volunteers, since lots of time would be… freed by degrowth. If people work four hours a day for their income, that leaves them lots of time for helping each other.

Last but not least; degrowth means security. Instead of worrying about where the next meal will come from, have the certainties of a decent life. Instead of worrying whether the planet will become Hell, the certainty that thousands of generations shall follow us. Shifting to degrowth means shifting to breathing an air that makes no one sick, swimming in clean rivers, eating enough without being a slave, deciding one’s own path without being a thief, a parasite, a brute, and without destroying the environment.

Instead of constantly being deprived of real necessities, and feeling frustrated by artificial fancies, enjoying the fulfillment of our authentic needs. Among which are enjoying liberty without brutality, leisure without exploitation, and autonomy without selfishness.

Jean-Manuel Traimond, together with Emmanuelle Rio, Roland Lehoucq, François Graner, Aurélien Ficot and François Briensis part of Collectif Passerelle, a collective of scientists and non-scientists alike involved in science & society questions. Their published articles (in French) are available at http://passerelle.ouvaton.org/