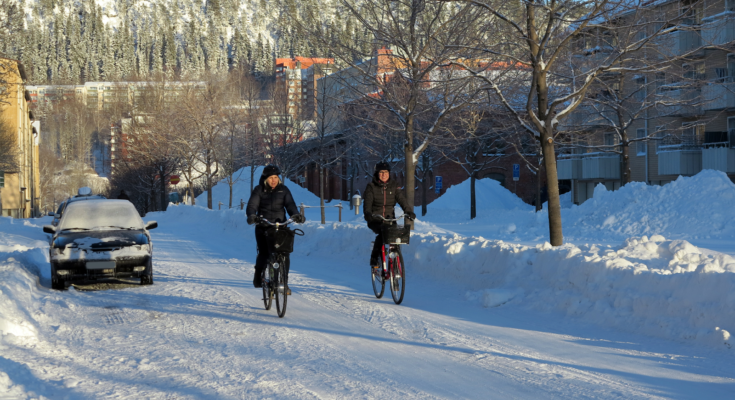 As a transport planner working in Stockholm, I have been reflecting on what the principles of degrowth mean for transport planning. The following concepts are some I feel most relevant to consider in a degrowth context.

The best trips are the ones not made

The first step of transport planning is to remove the need for it. This means planning for density, decentralization and mixed use. If everyone has their daily needs close by this reduces the distance of travel. In rural areas, where the population density is lower, people would need to travel less if there were more mobile services traveling regularly to the people instead of the other way around.

However, we should not fall into the trap of thinking that, as long as someone has their basic needs met close by, they will be content to  spend their time always in the same place. A good life is more than just the basics, it is also about variation and exploration. Paradoxically the internet, a useful substitute for much transport, could increase the yearning for other places. People and places from all over the world are easily available online and can make us yearn for the full experience of seeing them in person.

So what is the next possible step after reducing the need to travel?

Planning for the bicycle

You might think: Really? If I want to visit my pen pal from another country, should I go there by bike?! I am not saying that bikes can meet all our transport needs, far from it. But I do think that we should regard bikes as the default mode of transportation for a sustainable society because of their many benefits.

Biking is an active mode of transport. This means it requires physical activity. The WHO¹ estimates that over a quarter of the world’s population does not get enough exercise, putting mental and physical health at risk. Other people on our globe face the opposite problem. Due to lack of access to other modes of transport, walking takes up much time. Here bikes can free up time and make new places accessible.

Bikes are also suitable to combine with public transport like buses, trains and ferries. To get to a destination, people can ride to the closest transit station and from there, if bikes are allowed, take them with them on public transport. This would be faster than to cycle the whole way on meandering bike routes through neighborhoods. In urban areas short term bike rentals can be a complementary system.

For people with limited mobility though, bikes are only partly a feasible choice of transport. But, there are more and more variations of bicycles to fit people’s different abilities. For example, there are additional wheels if you have difficulties to balance, or electrical support if you don’t have the physical strength to pedal yourself (or  if just don’t want to get sweaty on the climb up the hill). For people without leg mobility there are options in forms of arm bikes. Of course this is still not for everyone, but let’s not underestimate the possibility of active transport for as many as possible.

In many cultures, the image prevails that cyclists have to be either super fit or have money for fancy bike equipment. I think, if bikes are less part of a culture, this is because of this limited view of who can be a cyclist.  In reality bikes are simple. They don’t require any schedules. They require less space than most other vehicles. They are comparatively cheap to make and easy to repair.

But biking is not safe where I live!

Often cyclists suffer from unsafe infrastructure. Either they share space with motor vehicles at high speeds or narrow paths with pedestrians. In our most recent history, transport planners solved a lack of space in infrastructure by building more of it. From a degrowth lens, we don’t need more, but we can use already existing infrastructure more efficiently. This should be done by redistributing space away from private cars towards more space efficient solutions like buses, bikes and pedestrians. If there is not enough space for separation spaces can be shared, but with regulation in favor of sustainable transport.

Reducing trips, planning for the bike and redistributing existing infrastructure are three concepts for transport planning  from a degrowth perspective. However, all practical solutions discussed also need to include the social questions. Who benefits from this solution and who doesn’t? No transport solution will be put into place without causing negative side effects, even if they are an overall improvement. In order to ensure a fair transition, we have to make these assessments on local levels in dialogue with the people affected .

Sofia Buhrgard is a transport planner working in Stockholm.