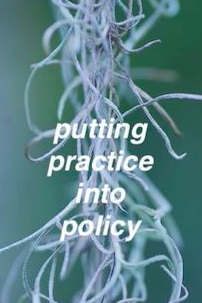 Grassroots Research commenced the Generation Expendable? study in mid-2020, when Australia’s pandemic fallout was first being described as a “shecession.” The term recognised the impacts on younger women and mothers working in more casualised sectors and the sharp increase of unpaid work in the home. As a cohort, women in their 20s and 30s continue to experience financial, psychological and even physical costs as a result of the crisis [1]

But what of older women? Already known to face “dual discriminations” at work, how would the pandemic shape their experience? Would age and/or gender render them a ‘generation expendable’ in a stressed labour market – expensive, vulnerable to ill-health, their needs ‘invisible’? The older women responding to our survey went into 2020 with reasonable job security. 90% were employed and 70% of those in permanent contracts [2].  A majority retained work – but for many, at a cost on hours/income balance, job security and personal health. With the capacity to earn already constrained by personal factors (17.8% living with disability); (19.1% with care commitments); and almost a third lacking housing security, it was unsurprising that 73% felt the financial impacts of the crisis would negatively affect their retirement [3][4].

Many respondents worked the pandemic ‘frontline’: as teachers, health workers, and delivering community care. Vulnerability to the virus was keenly felt, with 42% of women citing Occupational Health and Safety (OH&S) risks as a core factor at work in the pandemic. In addition to the slow rollout of protective equipment and other covid-safe measures, however, a shocking 52% of women were experiencing psychological risk, as a result of workplace bullying [5]. 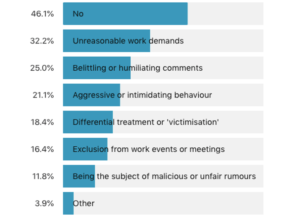 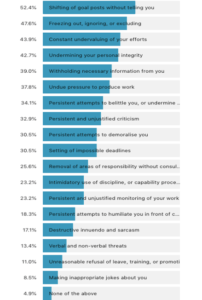 While researchers had anticipated a sharp increase in workplace ‘stressors’ and broader social anxieties, the high rates of bullying impacting women during this time far surpassed expectations – and official statistics from Australia’s Fair Work Commission.

Researchers conducted interviews to better understand the extent to which these behaviours had preceded the crisis – and therefore typify the Australian workplace – or were linked to the ‘pandeconomy’. While direct correlation was outside the scope of a small study, such high rates of bullying, with a noted predominance in the (largely feminised) sectors of health and education, suggested a deeper examination of Australian institutions was needed [6]. With key drivers of workplace bullying known to include lack of worker autonomy, (perceived) workload inequity, and the broader social hierarchies inherent to growth capitalism, did power relations structuring typical Australian workplaces exemplify a ‘cultural virus’ of workplace toxicity?

With bullying characteristically coming from managers to subordinates [7], researchers explored the victim’s relationship to the perpetrator. We expected to see alignment with bullying of women coming from a cohort of older white men, who dominate leadership roles in these sectors. This hypothesis bore out to a degree. However, researchers found an almost equal incidence of older women bullying other older women. Younger women managers came a notable third. 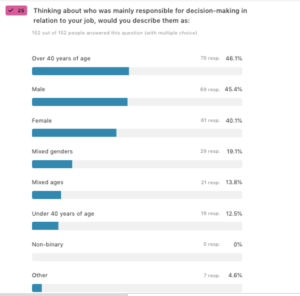 The health impacts of work for older women – including as a consequence of workplace bullying, were severe for participants during the first 12 months of the pandemic. Of the 152 survey respondents, 77.6% had experienced ‘stress and anxiety’, 39.5% ‘depression’, and 37.5% ‘low self-esteem’. Some women even relinquished work due to ‘toxic work culture’. While women dominate the care workforce, men continue to hold most leadership roles. Where women do lead, they are expected to conform to a ‘masculine’ model of management, a linearity that is the antithesis of cooperative and relationship-focused labour aligned with ‘feminine’ – and First Nations’ – models of economic organisation.

If the patterns identified in Generation Expendable? are indicative of a crisis of workplace bullying, this begs the question of whether institutions of work reproduce inequalities by design. Not only in age and gender-related hierarchies of worker value but those inherent to Australia’s patriarchal and colonial heritage more broadly. For women of all ages, who face a much greater burden of unpaid work, burnout may be a driver of workplace bullying for both victims and perpetrators. Both the commodification of women’s labour and, conversely, the dependence of growth capitalism on women’s unpaid labour, work to this end. If we are to address women’s burnout, we will need transformative change, rethinking Australia’s workplace systems and hierarchies entirely, using strategies of degrowth and more circular, feminine models of production.

The neo-Liberal values of competitive individualism are intrinsic to the way Australia works. To drive equitable outcomes for Australian women, for all Australians, we need to pivot sharply to a focus on care and the value of relationships as economic currency, over that of money. Policies such as a basic care income and support for cooperative ownership of land, and work assets would support the dismantling of consumer capitalism so desperately needed.

[1] https://www.wgea.gov.au/publications/gendered-impact-of-covid-19 [2] N = 152 [3] Children or others outside the home for more than 20 hours per week [4] Broadly characterised by 21% living in the private rental sector and only 17.8% being outright homeowners [5] As defined by the Fair Work Commission and in a UK NHS study [6] Fair Work statistics show Health and Education regularly top sector lists for workplace bullying [7] https://www.universalclass.com/articles/business/characteristics-of-workplace-harassment’perpetrators.htm

Myfan Jordan is the Founder of Grassroots Research Studio  She has spent 20 years working with communities at the grassroots: as an advocate and researcher doing co-design policy development. Myfan has expertise in ageing and aged care, LGBTIQ+ advocacy, housing, gender equality, disability and intersectional disadvantage. She is a passionate advocate for degrowth. @ResearchStudio @myfan_jordann www.grassrootsresearch.com.au