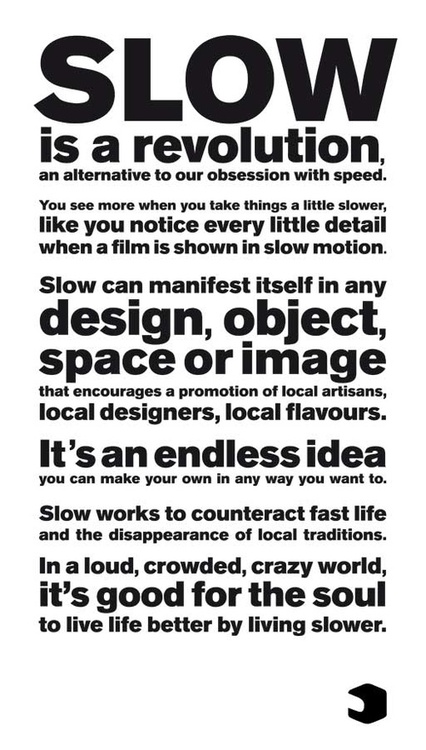 In this conversational blog, we seek to explore slow movement in order to gain insight, challenge some of the norms and enjoy a conversation over tea! We aim to link degrowth and “slow” and explore whether slow could be compatible with degrowth and in what way.

Zhanara: When we start talking about slow movement, there is a question: what do we actually mean? and where did this all start? Here it would be good to mention that slow movement takes its origin in the concept of Slow Food which appeared as an opposite movement to fast food.

It arose in Italy to call for local food production, sustainable farming techniques, cooking and eating in a healthy, slow and friendly environment. What is important when we talk about slow movement is that it addresses the critical and eternal question of lack of time in a society that lives under stress of working more, gaining more and consuming more. It brings us to the problem of time poverty.

Lyudmyla: But why do we experience time poverty? Time is an important resource for management of production, particularly for calculating labour-power. Both time and labour power become commodities that actually operationalise capitalism. (Marx 1976). Therefore creation of different temporal spaces could allow to challenge capitalist economy as well as to question the supremacy of a productive lifestyle when you live to work,  to earn and then to consume. For instance, phenomenon of squats can be brought up here as an illustration of a space with different time-spending practices (Cattaneo, Gavaldà, 2010), as living in squats often involves unpaid work on renovating abandoned houses, communal gardening and volunteer service work.

Riya: Yes, Lyudmyla, I agree with you. For me, the most fascinating part of slow movement has been to think about time and temporality. What you said reminds me of E.P Thompson’s work on time, where he discusses the differences of the perception of time by different communities. He says that since the clock arrived on the factory floor, the bodies and movements of the workers was much more controlled. Their breaks and productivity was counted on the basis of how much they produced during a specific time frame, for example, work productivity in an eight-hour working-day (Thompson 1967). So, I completely agree about the need for a counter-movement to the hegemonic fast-paced life and fast-food and the constant rush, but is ‘slow’ practical?

Zhanara: Here we should note that we are not calling to do something slowly just for the sake of the word “slow”. Slow living basically means doing something at the speed that allows us to appreciate the quality, enjoy the process and truly benefit from it. This concept eventually benefits everybody because such a way of living allows involving people on the basis of mutual interest. There is an interesting Russian saying: ‘the slower you go, the further you`ll get’. That makes a lot of sense when we talk about the quality of what we do and who benefits from this quality. Could the idea be compatible with a growth-oriented society? I don’t think so.

Lyudmyla: Yes, to be slow here means to produce  different ways of interactions. The type of communication which gives space for and also highlights meaningfulness and caring. Moreover the slow approach  is supposed to provide time for reconsidering what you are doing and why you are doing it. Whether your current activity is worth spending your life on? Whether it is satisfying for you? Whether it contributes or at least does not harm  your well-being?

Riya: I completely agree with the two of you but I feel that it would be easier to theorise it than to put it to practice. Because, for example, in academia, while the professors, who have permanent positions can opt for a slow academic life, younger scholars and people without permanent contracts can find it hard to practice it because of their precarious positions. And the system is built as such that we have to publish in order to get jobs, and at least get some kind of security in this neoliberal academia, which makes one feel uncertain most of the time.

Lyudmyla: This is absolutely true, but I think the whole point of slowness, as said, is to challenge social structures, through proposing alternative temporalities. It has to be a complex process of finding time to devote to restructuring of working environment. We need to reflect on and reconsider those foundations that underpin academic labour and realise the presence of gender, class and race struggles in universities.

Zhanara: I suppose, with this we come up with the question of choice. The modern society functions in a way that most people are forced to work under conditions of fixed working hours, for instance, from 9 am to 6 pm without the connection to actual efficiency of these hours or without linking this schedule to the specifics of a job. Or, as you say, researchers work under stress to produce articles and to complete a certain amount of hours in conferences and workshops. But then, is it the person who chooses this way of living or is it the system that forces everybody to play by these rules of the game? At the end of the day, on a personal level can we really choose how to manage our own time?

Lyudmyla: But whether it is really a question of choice? Don’t you feel that the neoliberal economy tends to individualise social problems. Look at how many books there are on time-management, time-efficiency as well as public talks on the struggle against procrastination. Whereas we almost never challenge temporality itself. The lack of time is rarely brought up as a social problem for all of us, but is often presented as something private that just needs to be managed smartly.

Riya: Yes, I don’t think it’s about the individual choice in this matter, because if we make an individualistic premises to begin with then we assume that even time is private property – that can be saved, wasted, spent and so on. Therefore, I think there has to be an institutional change in order for academia to be slow. Because it seems that universities publish because they want to compete with each other, for global rankings, more research in a university means a better ranking position. So, I think there needs to be a larger structural discussion about  the obsession with a constant lack of time.

Zhanara: Well, that is the point. Time scarcity can be addressed through the degrowth prism because it is important to collectively decide if we want to have more free time as an aspect of well-being and less time-stressed society and, obviously, we will have less working hours to be paid for but we still compensate it with life satisfaction and fair work distribution. And again, being paid less there would be less temptation for unnecessary consumption and more time for ourselves, our families, our connections, enjoying nature, etc.

Riya: Yes, definitely, degrowth society can be a conducive space to rethink about work and time and quality of life. But I would also add that time devoted to care and social relations should not be romanticised because it is often gendered and racialized (for example, in global care chains). But of course if we can practice work-sharing, not only will we have more time but can also change socio-cultural gendered and racialized roles.

Lyudmyla: I think it has to be acknowledged that the practices that slowness involves, such as sharing and caring are also tiring and challenging. So being slow is not only about chilling and relaxing. In this case we definitely have to admit that commitment to slowness is a process and a struggle. Yet, we have to be careful with those dangers that slowness implies. To some extent slow – is a paradoxical concept. On the one hand slowness aims to challenge inequalities while urging to favour well-being of all rather than few. Whereas on the other hand, slowness is a luxury which is affordable only to few. You can juggle your time resources only if you have enough power, enough independence and autonomy, as this is a position that allows you to make a certain choice.

Zhanara: I would suggest us to especially focus on one of the most important aspects of degrowth such as unnecessary consumption. Lyudmyla, you are asking whether the time for slowness can be found. The point is that time as a resource is already being played around by growth-oriented societies. So, what if we take time out of the systemic input-output framework? Let`s say, people are paid not for hours they spend at work but rather for the contribution they make to common well-being. Practical example: in some rural Spanish areas people do not work to buy houses, cars, advanced domestic appliances, posh clothes, etc. Some families inherit the land of their ascendants and they build houses little by little, sometimes, through couple of generations. They work in their farms, get what they can from yields and invest it into a house meanwhile continuing having their slow and enjoyable lifestyle in the countryside – in the modern terminology we call it simple pleasures: rural food from local markets, family gatherings, walking in natural landscapes, getting to know the laws of the land they farm. Thus, I suggest combining the shift from unnecessary consumption, re-considering time as the right rather than resource and slow living.

Riya: In this case, don’t we risk romanticisation of the Spanish example, how many people can really afford to move to farms and subsist? Since that seems highly unlikely, I agree with Lyudmyla regarding the paradoxical nature of slow movement, I think slowness for some would directly require others to compensate and work more, at least within the current work-paradigm. And there is another paradox that bothers me, on the one hand we want slow movement as part of the degrowth society and on the other hand, we want to change the structures fast because growth society cannot be sustained for long…

It seems that we are left with more questions than answers, but I politically believe that rethinking and redefining temporalities is important for degrowth conceptually as well as practically.